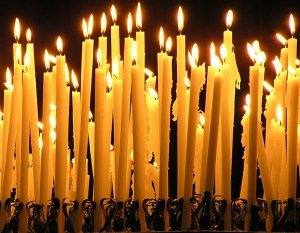 Yesterday I read this article from America Magazine, titled “A Communion of Saints and Sinners: Loving an Imperfect Church,” and I was touched by its insights. The writer, Leonard J. DeLorenzo, reflects on how the church can simultaneously hold so many sins and failures, and yet also be the life-giving source of healing, joy, sustenance, and communion that so many of its members know and feel it to be. Musing over this perhaps counterintuitive reality, DeLorenzo writes:

The church is human with all that is good about our humanity, but not without those parts of us that have been corrupted through pride, the lust for prestige, acts of violence and hidden malice. The church is also divine, for the love of God, which is God’s very being, touches us here to first heal the corruptions of our humanity and then elevate our humanity toward a relationship with God.

What Congar and others rediscovered at the [Vatican II] council was that the church does not exist as an idea or in the imagination, but is in fact a living, breathing, beautiful and wounded body, whose very life is generated from the grace of God, though it is not yet fully what it is called to be.

That is often what strikes me each week when I go with my husband and our daughter to Mass. Sitting in our pew after receiving Communion, I watch all the rest of the people approaching the Eucharist, lining up together, advancing slowly forward together to receive the same Body of Christ, each one together participating in a worldwide communion of 1.2 billion Catholics — and a broader communion with another billion non-Catholic Christians — found to varying degrees in every corner of the globe in thousands of different cultural settings. And I think to myself as I watch them that, in the words of St. Paul, each one of these is a member of Christ’s mystical Body; each one is precious; each one is equally important; each one is sinful in his or her own ways, and each penitent one is lovingly redeemed. We are a vast yet intimate community of one body having many parts, sharing in the wounded-and-risen Body of our common Lord. In the words of a favorite hymn of ours: “We are one body, one body in Christ, and we do not stand alone…”

We do not stand alone — even though our communion is imperfect and consists of very flawed people. It’s impossible to be fully in relationship with Christ without also being in relationship with the rest of his flock. While each member of the church has his or her own individual relationship with Christ, Christianity isn’t a religion for individualists preferring to remain apart from the community of Christ’s people (as Pope Francis has reminded us on many occasions). Christianity is in fact a deeply communal religion that calls its members not to a purely solitary spiritual journey of individualistic isolation, but rather to a spiritual life lived as a vital part of Christ’s earthly Body-in-community. This Body-in-community is the whole church.

The notion of real community often doesn’t rank very highly in our individualized Western culture, which can make it seem easy to think that the church as a community is irrelevant, or at least unimportant, to a person’s active living practice of his or her faith. But this would be a very incomplete understanding of what Christianity, as a relational religion, truly is. The church community, comprised of ordinary folk, certainly isn’t a perfect society in either its human leadership or its laypeople. It will always bear sins and failures within itself, some very grievous. It is us in all of our humanity: the beauty and the ugliness are both there. More importantly, the grace of Christ through the Holy Spirit is always there — in that communal body, in the sacraments, in togetherness — just as his grace also dwells in the individual prayerful heart. The grace is always there, always offered to us, the flood of light to warm our spirits, to comfort us and beckon us to walk toward it, to let it guide us on our way.

I began to experience an awareness of the church’s communal wholeness in a new way when I recently signed up to be a eucharistic minister (one of the people who offers either the eucharistic bread or wine to those coming for Communion). It happened that the very first person to whom I ever gave Communion was my husband, who himself chose to become Catholic two years ago, followed by our daughter, who had her First Communion almost one year ago. There I was, holding the chalice of wine, looking into their faces and hearing myself say to them, “the Blood of Christ,” as I gave them the cup. (Our daughter, who is 8, always gives me a big hug right after I give her Communion before she heads back to the pew, which makes it that much sweeter!). As each person after them approached me, I felt more and more a sense of humility; of how, despite my flaws, I am a part of this body of equals before God, and how awed I felt to be able to serve that body-of-many-parts in this very modest way. Each time that I’ve served as a eucharistic minister since then, I have experienced this sense of humility and awe. There’s something very special going on in that body, imperfect though we all are.

In a somewhat related way, all of this reminds me of what Pope Francis and Pope Emeritus Benedict XVI have repeatedly said about what Christianity is: Christianity can’t be defined as primarily a system of ethics and morals, as though it were simply a kind of philosophical humanism. Christianity is primarily a relationship with a divine Person, from which these things then flow. It’s a relationship with a God who emptied Godself to become enfleshed as a human born of a woman, to become a Person both fully human and fully divine; this Person suffered torture, died, was buried, rose again on the third day, and ascended to Heaven in his luminous, resurrected physical body — as witnessed by many women and men who would later go to their deaths for refusing to say this did not happen. As St. Paul wrote in his letter to the Philippians around the year 50 (and scholars say he was likely quoting an even earlier source), this divine Person demonstrated the divine love for Creation in the most self-emptying of ways, which in some mysterious way also brought about our own redemption and salvation.

DeLorenzo reflects on the church community as Christ’s ongoing earthly instrument in this:

And in what is the richest irony of all, God elects to work through and with ordinary, sinful human beings in this plan of salvation. For the plan is to save us together for each other, not separately for our lonesome selves. It is the communion of sinners that is the sign and instrument of this salvation.

This sinner thanks God for that!