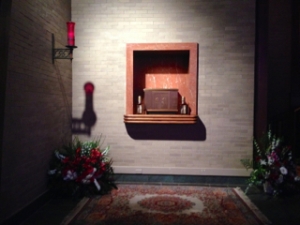 The Tabernacle at Our Church

This photo is of the Tabernacle that is in our church. Every Catholic church has one of these, although they don’t all look the same. The Tabernacle is the place where the consecrated Eucharist, also called the Host, resides. The Hosts in the Tabernacle are those that were not received during the last Mass and have not yet been taken out for the next Mass. There is never a time (other than the Liturgy of the Eucharist during Mass) when the Tabernacle is empty. Because it is Catholic faith that the Presence of Christ inheres in the Eucharist in a real way, in every Catholic church there is a perpetual flame burning beside the Tabernacle, an ever-present witness that in this place dwells the Presence of the Lord. The word “Tabernacle” comes from the Old Testament: it was the structure in which God’s Presence was understood to dwell in a special way in ancient Israel. Each day — depending on the individual church, it could be all day or a certain time of the day — Catholic churches are open so that anyone can come in and pray or meditate in silence before the Tabernacle, in Christ’s Presence.

I mentioned that the only time the Tabernacle is empty is during the Mass’s Eucharistic Liturgy, when its doors are opened and the Body of Christ within is distributed to all present, along with the newly-consecrated Hosts. Last Sunday after receiving Communion, we returned to our pew as usual to kneel in interior prayer and close our eyes, to be in communion with Christ. When I opened my eyes, the final people were going up for Communion, and my gaze happened to land on the Tabernacle (we tend to sit close to it). Its doors were still open, since Communion was still being distributed, and as I looked at it I reflected on what those open doors mean.

Those open doors signify a God who revealed Godself to us through a self-limiting act: becoming incarnate as a human, to be carried and borne by a human mother, to experience human bodily needs and suffering. God did this in an act of supreme humility, of self-emptying (kenosis), of solidarity in suffering and in joy, and of service to us. As Pope Francis is fond of saying, Christianity is not primarily a system of ethics, although the ethical treatment of others, especially the most weak and vulnerable, obviously flows from what Jesus taught. Pope Francis frequently and rightly reminds us that Christianity is primarily a living relationship with a person — divine yet human — who suffered, died, and rose from the dead to teach us that death is not the end of life, only its changing. This person, Jesus, taught us to orient ourselves to “the kingdom of God,” which he alternately described as being “within you,” or “like a treasure buried in a field,” or “like a pearl of great price,” or “like seeds that a farmer scattered” that land on three different types of ground (rocky, thorny, and fertile), or “like a mustard seed,” the smallest of seeds, which grows into a full-bodied tree. Jesus came to show us what the kingdom of God is.

The picture that God reveals of Godself in Christ is a picture of self-denial, self-gift, service, infinite mercy, and infinite love. After all, God demonstrates what God is calling us to. The Tabernacle’s open doors last Sunday spoke to me about Jesus’ eternal self-gift through Communion, which he inaugurated when he distributed the bread and wine, pronounced them his Body and Blood “given for you,” and said to “do this in memory of me.” The Tabernacle’s open doors signal that even today, 2,000 years later, Christ is still distributing his Body in a mystical way that never ends, and in which we are invited to take part. Yet a final thing the open Tabernacle made me think of was the Multiplication of the Loaves and Fishes, which the Gospels describe as Jesus’ feeding thousands of people from scarcity. The food, to the crowd’s astonishment, just kept on coming, and Jesus just kept on distributing it. The open Tabernacle reminds me of that event because that event (like the open Tabernacle) is connected to the endless distribution of Christ’s self in Communion. Like the day with the loaves and fishes, Christ keeps on giving food to us — but as the open Tabernacle will always remind us, the food that he gives now is Himself.